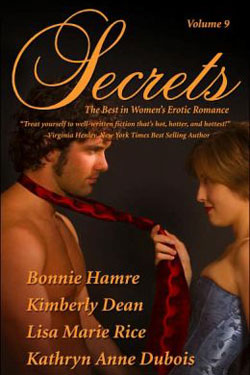 “I want your daughter.”

Nicholas Lee kept his voice low but the man sitting across from him heard and turned pale.

Ah, Nicholas thought. The perfect manners of the upper crust. Good thing he himself didn’t have any manners at all.

Summerby had the pale refined looks only generations of wealth and privilege could bestow, and the dissipated features of the soft and the weak. For all that he’d been born rich, he’d managed to whore and gamble it all away. He was a whisper from total ruin and Nicholas would have been happy to push him over the edge if it weren’t for the fact that Summerby had something he wanted very, very badly.

Nicholas studied the storm raging outside the big beveled window panes then brought his gaze back to Summerby. He smiled and the man paled further. Good. Nicholas needed for him to be afraid.

“I said I want your daughter,” Nicholas repeated, his voice hard. “For a few weeks. And you will make sure I get her.”

“This is—this is crazy.” Summerby gave a half laugh. It strangled when Nicholas remained silent. “You can’t have my daughter. Why, you’re nothing more than a—a gangster.”

“No, I’m not.” Nicholas lifted his eyebrows. “Not any more, anyway.”

He let his eyes roam thoughtfully around Summerby’s elegant study. Original Chubb watercolors, Georgian furniture, an Aubusson carpet. And the paler spots on the dirty off-white walls where paintings had been taken down and sold, the Chippendale desk which needed restoring, the empty shelves where first editions had been auctioned off. The house itself would be the next to go. “Though I do keep my hand in some…ventures. For example, I just bought Morris Caneman’s business.”

Summerby had broken out in a sweat. Lightning flashed again, followed a second later by a clap of thunder so loud its echo boomed in the room. Outside the study windows, the branches of the massive oak on the front lawn dipped and swayed, whipped into a frenzy by the rising wind.

“I’ll be very clear.” Nicholas speared Summerby with his gaze. “I might be persuaded to forgive the debt and save you from ruin. You might even get to keep the house. I understand it’s been in your family for four generations. But you have to do something for me.”

“Spread the word, the Secrets anthologies are hotter than hot. … Red Sage Publishing has another steamy winner.”