It sounds good in theory: A heroine who’s rough, tough, buff, gruff, and takes no guff—from anybody, least of all the hero. She is the antithesis of the simpering ‘80s heroine who bore the brunt of all the hero’s neuroses. She’s not taking it anymore. She can outfight him, outrun him, and outgun him, and she makes sure he knows it.

She knows her own mind and makes sure you know it, too. She never backs down, not even when she’s in the wrong.

In Real Life, I avoid her whenever possible. The male version, as well.

I worked for many many years in a very difficult, mostly female profession which was chockablock with alpha females who could wrestle you to the ground while quoting Hegel, in German. They knew everything, were amazingly opinionated and boy, did I grow tired of the vibe.

Though my women have very strong moral lines in the sand they will never cross and they are not pushovers; they’re much softer, more accommodating, easier to get on with and frankly, much less tedious. I like to think that if my heroine can find a peaceful solution to a problem, she will.

The world is full of people who are absolutely convinced they’re right, they say so loudly, and they will not back down. The results of this kind of personality are right before our eyes. My heroines are not going to add to the conflict in the world if they can help it.

You know the books. He thinks she’s a slut and hates her—though secretly lusting after her—until the next to the last page. Or is wrongly convinced she was the one behind his brother’s death, or the collapse of his company. I hate it when the heroine has to spend the entire book convincing the hero she’s worthy. This is especially tricky in sex scenes where the sex is used as a power ploy, which to me is as unsexy as it gets.

I need for my hero to genuinely admire his woman, right from the start. A romance novel usually covers the very beginning of a love that will last a lifetime. The emotions coursing through the body during this intense time are usually imprinted into the psyche by all those hormones. I don’t want even a molecule of contempt or distrust leaving a slimy trail in the hero’s head. He might be so overwhelmed by lust he doesn’t realize he’s falling in love, but the whole arc of the relationship has to be one of positive emotions, otherwise it doesn’t work for me.

Does this eliminate conflict, make the story bland? Of course not. There’s quite enough conflict implicit just in falling in love with someone of the opposite sex and who comes from that other planet. In a romantic suspense, there’s plenty of conflict and danger, the heroine won’t obey the hero, which drives him crazy because he has a burning need to keep her safe and out of the action, or she has her own perfectly rational agenda and pursues it even into dangerous situations, which drives him even crazier.

But he loves her, even if just a little, right from the start. He just doesn’t recognize it yet. And he would tear his own throat out before hurting her in any way.

I write erotic romance, but if you’re reading my books to get some tips on new positions and the latest in sex toys, you’ve come to the wrong place and you’re reading the wrong book. I won’t be able to give them to you because sex as recreational sport doesn’t interest me and if it doesn’t interest me, how can I get you all excited? What interests me are those tumultuous, breathless moments of passion where your entire world is turned topsy-turvy as you’re falling in love. The real deal, too—not just a passing infatuation. The men, particularly, are very hard-hit. Not only are these ferocious, earth-shattering emotions completely new, my men had no idea they even existed. My men don’t need sex toys to get excited. If anything, they need to be hosed down.

A criminologist once calculated that there aren’t more than 90 serial killers in the world at any given time. You wouldn’t know that from novels, though. In books, there are enough serial killers to be considered a demographic. But serial killers seem a little too nutty for me to make effective villains. They are insane and completely irrational. Sooner or later their craziness brings them down.

What I find terrifying is that 5% of humanity that psychologists reckon are sociopaths. Now they scare me. They are completely sane, utterly cold. They won’t kill you for sport or because the fillings in their teeth tell them to. They will leave you alone—unless you’re standing in the way of what they want and then they will mow you down without a second thought. I write about these bad guys and they scare me because they are rational and impossible to distinguish from you and me and would kill you or hurt you in a heartbeat. Brrrr.

Now, I like vampires as much as the next girl. All that power and darkness…well. Very exciting. It takes a very special mind to come up with that entire vampire world, with its arcane rules governing their behavior and physiology, one I admire. But I couldn’t do it, not in a million years.

So ladies, hats off to you all and fangs for the fabulous reads (sorry, couldn’t resist).

(Originally published on February 25, 2008 at HarperCollins)

Well, if you pull out my fingernails with a pair of pliers, and hold a blowtorch to the soles of my feet, I’ll confess why I love writing dark romantic suspense. Because it’s the only genre where a writer can write in a heartfelt and unironic way about honor, gallantry and courage.

These must take the form of subliminal messages, of course, because these are untrendy themes. We worship money and careers, are obsessed with externals and our parental feelings are often expressed in terms of maneuvering to make sure our kids get into the right schools and meet the right people. Money, power, status. And, of course, love. Love as status symbol, love as hotness factor, love as two high incomes meshing. Those are the themes of which novels, if not dreams, are made of.

It works for many but not for me. I want knights, even in tarnished armor, I want men and women who are unbending, unyielding, brave and honorable and every single other Boy Scout attribute, plus hot. Because sex is the cauldron in which all those elements of two human beings are put and fused together until they become one.

In short, I want a hero. And I want him slaying those dragons with the help of his woman.

What is my job as a romance writer? The job description includes providing gripping writing, a strong a narrative arc and likeable characters, of course. But more than anything else, I must convince you, reader, within the space of about 400 pages, that what my hero and heroine are undergoing represents a bonding experience so strong that they will spend the rest of their lives together. I want there to be no question in your mind as to whether or not they will be able to overcome the problems life throws at them and still remain a couple, none.

He walked through fire for her. The suspense subplot is an exciting way of depicting the difficulties of life. A symbol of them, if you will. The danger subplot tests them both and finds them both strong and courageous and honorable. You know they are going to make it and that they will stay together forever.

I also love that moment in my books when both realize, while the bullets are whizzing around their heads and the bad guy seems to be winning, that they are no longer alone. They are facing this together and, together, they will prevail.

In my latest trilogy, The Protectors, for example, you will know, beyond a shadow of a doubt, that Sam and Nicole (INTO THE CROSSFIRE), Harry and Ellen (HOTTER THAN WILDFIRE) and Mike and Chloe (NIGHTFIRE, February 2012) will be together to the end of their days.

It makes all that hard work worthwhile. 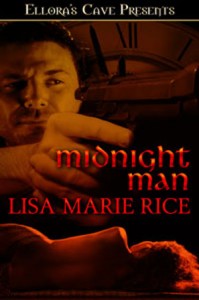