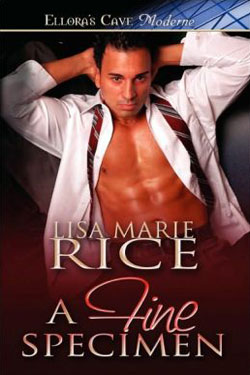 Alex was already putting Ratso’s escape from his mind when Cade cleared his throat. Clearing throats was not a good thing, particularly coming from someone who should have already disappeared, grateful that Alex hadn’t handed him his ass on a stick.

Alex looked up to see Cade obviously trying to brace himself. He had something else to say and it wasn’t going to be good. What was this? Alex’s bad news quota today had already been exceeded. His mouth tightened. “What?”

“I’m not the boss,” Alex said between his teeth.

“Right, boss. Anything you say.”

Alex rolled his eyes then glanced curiously at the white envelope. His name was neatly laser-printed in block letters. “Who’s it from?”

“Um, Captain Avery. Sir. He said to say he was sorry he couldn’t stay, but he had to go out of town.” Cade was shifting his considerable weight uneasily from foot to foot, casting longing glances at the door. Alex narrowed his eyes. He could read body language. Cade knew what was in the letter and it wasn’t good. “Captain said to be sure to give the letter to you in person,” Ben added.

Alex had already slit the envelope and was quickly perusing the contents. Then he frowned and started over again. Even after he’d read it two times, it still didn’t make sense. What the fuck was this?

Alex began from the top again, though the letter wasn’t making any more sense the third time than it had the second or first. Behavioral psychology major…dissertation…C. Summers…seven days…

What the fuck kind of sick joke was Ray playing on him?

“What’s this crap?” Alex asked, his voice low and dangerous. He lifted his eyes from the letter. Sergeant Cade squirmed again, his stomach following a second behind his shoulders. It wasn’t a pretty sight. “Did you know about this?”

“Do you know what the old man wants me to do?” Alex’s voice rose as he leaned forward. He was feeling angry and aggrieved. This was not what he needed. Not today. Not tomorrow. Not ever. “There’s some fucking scholar who wants to study…” Alex frowned at the paper he held in his hand then frowned at Cade, equally displeased with both. “‘Dominance Displays in Law Enforcement’. Can you imagine that? I’m supposed to allow some fucking pencil-dick geek to follow me around! Starting today. Fuck! Right when we’re in the fucking middle of this fucking mess. Right when I’m ready to nail that fucker Lopez. Now how the fuck am I supposed to do my job when—”

“Excuse me,” a soft voice broke in.

Alex switched his glare from Cade to the woman standing in his doorway.

No, not woman—girl. Some high-schooler, to judge by the bag of books at her feet. Alex was too much of a cop not to notice everything about her and the more he looked, the more out of place she seemed in the cop shop.

What the hell was a high-schooler doing in a police station at eleven o’clock on a Friday morning? Why wasn’t she in school?

Cade, the traitor, had slipped out while Cruz was focused on the girl.

“Lieutenant Cruz?” Her voice barely rose above the background noise of the squad room behind her. She angled back and looked at the name stenciled on his door, then back at him. “Lieutenant Alejandro Cruz?”

She wanted him? What the fuck was this? How did she have his first name? “Yeah, that’s me, miss.” Alex’s hand hovered over the morning’s reports. And yesterday’s reports. He was behind in everything and he didn’t need this. “You’ll excuse me if—”

She cleared her throat. “May I speak with you a moment?”

Alex pinched the bridge of his nose. Hard. It was shaping up to be one of those days. First Ratso Colby slithering his skinny frame through the toilet window of a skanky dive, taking with him Cruz’s best hope of nailing Angelo Lopez this year. Then Ray Avery siccing a geek on him. And not just any geek, no sirree. A geek who was supposed to spend a week glued to his side, getting in his way while he was working night and day to put Lopez away. What the fuck was that about? Ray knew better than that.

And now fucking babies wandering in off the street, asking for him.

Be polite now, Alex reminded himself. Don’t snap. The kid was going to grow up and vote some day and every police circular stressed good relations with the community.

“Look, miss,” Cruz said in his best talking-to-baby-civilians voice. “This is not where you want to be. Trust me on this. Now if you go back down to the ground floor you’ll find a big desk, and behind that desk is the muster sergeant. He’s the one you want to talk to.”

“No, I don’t want the muster sergeant.” The girl widened her stance, picked up her book bag and held it in front of her like a shield. She took a deep breath. “I need to talk to Lieutenant Alejandro Cruz.”

“Well, that’s me, all right.” Alex tried to stretch his mouth into a reassuring smile and felt rarely used facial muscles balk. “And who the fu— Who are you?”

“Well, look, Miss Summers, I don’t know what you want from—” Alex broke off, appalled. His brain spun. Caitlin Summers.

He rose slowly and his eyes widened in horror. “Dear sweet God, don’t tell me you’re—”

« Return to A Fine Specimen