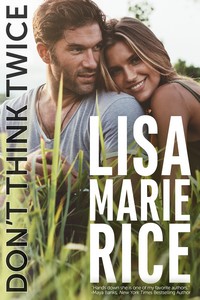 She’s trouble with a gorgeous face.

Jack Sutter has a problem. Francesca Mansion has descended upon Carson’s Bluff to conquer it. She represents a heartless, soulless corporation bent on changing the laid-back town’s mellow way of life and Jack will do whatever it takes to stop her. Problem is Francesca is also gorgeous. Funny. Ferociously smart. And she makes his heart pound so damn hard, he has to constantly remind himself of the truth –she’s the enemy.

He’s her adversary in a high stakes game.

Jack Sutter, Sheriff and Mayor of Carson’s Bluff, is a tall, sexy drink of water—everything Francesca’s ever dreamed of in a man. But he’s bound and determined to keep his town out of the clutches of her ruthless uncle. In fact, the whole quirky place is almost as seductively charming as Jack himself. Francesca’s falling fast, and soon she’s facing a decision which could change her life forever …

Don’t Think Twice is a lighthearted, feel-good small town romance. The perfect escape read for those looking for heart, humor and a happy ever after!

NOTE TO READERS: This story was originally released under the title Homecoming.

“Lisa Marie Rice is an ‘autobuy’ author for me. She never disappoints! Her books are comfort reads that I reread time and time again. Hands down she is one of my favorite authors.”
–Maya Banks, New York Times bestselling author

“Rice is skilled at bringing the drama and the heat.”
–Library Journal, praise for the author

“What amazed me the most was the love scenes, LOL! They were so well done that I’m off to read another LMR book now.”
–Five Stars for Port of Paradise, Kathleen on Goodreads