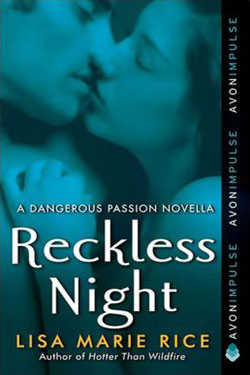 Even the fucking wrapping paper was perfect. Hand-made wrapping paper. Florentine-style marbleized paper in brilliant swirls of turquoise and emerald green. A work of art in itself, something his brilliant wife probably shot off casually on some morning in which she had a little spare time.

But the gift, ah. The gift was not something shot off casually. It was the work of many painstaking hours of labor that his wife had put in because…she loved him.

It still astonished him.

He carefully opened the package and looked down at the small square canvas.

A portrait of his hand. His hand on a table, a small vase of flowers in the background. He stared. It was utterly perfect. He had big, strong hands and she captured that strength, the raised veins, the scars, even the yellow calluses on the side of his hand from a lifetime of judo.

His hand wasn’t beautiful, but it was large and powerful and she caught that, perfectly, and set it against the delicate crystal vase of flowers in the background, the flowers at the edge of maturity, just ready to drop their petals. The contrast between the powerful male hand and the delicate bouquet was stunning.

The canvas looked ancient, like some Renaissance painting by one of the old masters that had time travelled to their home, the dark background and earth tones of his hand offsetting the pale pastels of the flowers.

He pointed to the vase of stunning flowers. “What are those, my love?”

They looked like roses, only fuller, more beautiful even.

And the perfect finishing touch, giving it a patina of ancient mystery—gilt flourishes around the edges, making a golden frame within the carved wooden frame. And…if you looked closely, the perfectly symmetrical pattern revealed itself to be tiny interlinked ‘d’s. Her secret signal to him, the only time she allowed herself to even think his name.

Because his name wasn’t Manual Rabat, not at all.

In a previous life, what felt like a century ago, his name had been Viktor ‘Drake’ Drakovitch. A name that had been feared and envied in many places and hated everywhere.

A name that even now would bring hitmen out of the woodwork if there was even a hint that he was alive. Criminals from all over the world would come crawling out from under rocks to travel to Oceania to have the privilege of killing him.