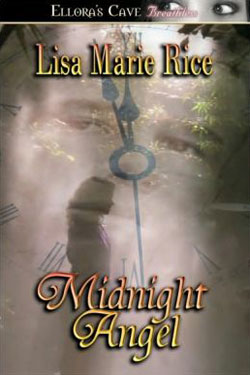 Allegra stroked her beloved harp, Dagda, named after the fierce King of Eire. When his harp was stolen by a rival tribe, it flew back to his hand, slaying nine of his enemies.

Her Dagda wasn’t a fierce warrior. Not at all. Her Dagda was gentle. He was her friend, her confidante, her child, her lover and—over the past five months—her consolation. Dagda had kept her alive and sane when she thought she’d go mad. She’d lost her father, her health, her career, her memory and her sight in one night. If she’d lost her music she’d have thrown herself out the hospital window.

Suzanne and Claire had fought fiercely with the doctors and nurses to let her have Dagda in the hospital room. They’d pulled strings and cajoled and threatened. Claire’s father had gently reminded the Executive Board that the Parks Foundation had donated $12.3 million for the new Oncology wing last year.

And so Dagda had been with her the day she’d finally been able to sit up in bed. The harp had been placed right by her bedside where she could touch it. The nurses just cleaned around it every morning and every evening. In the way of humans everywhere, the unusual became the norm very quickly. And when Allegra had finally been able to get out of bed, she’d pulled herself upright on Dagda’s column.

The second she’d been able to sit in a chair, Suzanne had positioned Dagda next to her knees and Allegra had been able to strum the strings for the first time in what felt like forever. She didn’t need sight to play Dagda. Her hands knew what to do, all on their own.

Just those first sounds, a few tentative chords, had been enough for her to know that she’d made it, after all. She’d survived. Dagda had been her constant companion ever since.

Maybe she had another companion now, besides the darkness.

No, God, that was crazy thinking. Something that came straight out of her pain and loneliness.

She knew absolutely nothing about him, except his name. Douglas Kowalski. Good Irish name. Oh, and his rank in the Navy. Senior Chief. She had no idea what that meant.

She knew he was Suzanne’s husband’s friend. And partner. So presumably he was morally upstanding, or at least he wasn’t going to embezzle the company funds. Allegra had only met Suzanne’s new husband a few times, but he didn’t strike her as the innocent, trusting type. Anyone he chose would be honest and smart. Suzanne’s husband would never choose someone dishonorable or dull-witted as a partner.

What else did she know?

He was single. How had he put it? I don’t have anywhere to go.

He liked music. He’d been to Ireland. He had a sense of humor.

He had the most incredibly delicious voice. The deepest she’d ever heard, the low bass tones making her diaphragm vibrate. It wasn’t just the timbre, it was the steadiness of his voice. The kind of voice you instantly, instinctively believed. The kind of voice that if it told you the moon was made of green cheese, then you wondered what a slice would taste like.

He was tall. Very tall. She remembered that instant of disbelief when she’d first heard his voice way above her head. For a moment, she’d wondered if he were on steps, or even somehow on another floor.

He was strong. The second she’d touched him on the arm, she’d felt the muscles beneath the jacket sleeve, like warm, moving steel. She’d been held in his arms, for just a moment, but it had been enough to feel shielded and protected by something immensely powerful.

She knew he was standing just off the stage, listening to her, waiting for her. Allegra had absolutely no doubt about that. He was exactly where he said he’d be. She knew that like she knew the words to “Amazing Grace.”

She felt connected to him. It was insane, but there it was. How on earth could she feel connected to someone she’d just met? Who she’d exchanged just a few words with?

She struck an experimental chord. The playlist had been decided last week and she should be singing “Flying,” but another song came out. An old Celtic air her father and his brothers used to sing when she was a child. They mostly sang it when they’d had a few beers too many, which they often did.

“Break of Dawn.” It was always connected in her mind with happiness, unfettered joy. The baritones and tenors of the Ennis men had made it a rousing ballad, a male chorus of uncomplicated jubilation, but she played it slow, in a minor key. For someone who was tentative, unsure about happiness and joy.

Someone who thought all joy had fled from this world. Uncertain at the thought that it still existed. But still hoping.

Douglas would never have heard the song. He wouldn’t know that she was changing it for him, that it came from the heart.

She was halfway through the song, lingering over the notes when she heard exclamations from the surrounding crowd. A cry, an angry mutter. A woman’s voice rising in complaint. Steps moving sharply across the marble floor.

And then an explosion rocked her world.