Excerpt: Into The Crossfire 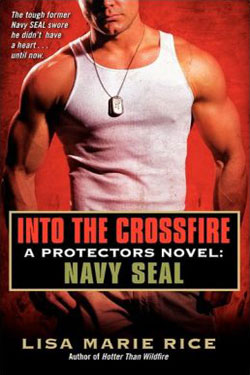 Well, well. Look at that.

Sam Reston leaned his shoulder against the wall of the hallway of his office building and simply drank in his fill.

His own personal wet dream, standing there in the hallway between his office and hers, desperately scrabbling through a huge, expensive-looking purse.

Everything about her was expensive, classy. Top of the line. Real high maintenance, too. The kind of woman he stepped right around without a second thought because he didn’t have the time or the inclination, but shit, with her he’d make an exception.

He remembered every second of the moment he’d first laid eyes on her. Two weeks, three days and thirty minutes ago. But who was counting?

He’d been undercover, infiltrating a gang of smugglers and thieves working the docks. His client, a big shipping company, had found it impossible to get a handle on the losses incurred during transhipment at the docks, which last year had totalled almost ten million dollars.

The police had gotten nowhere and the company suspected that someone somewhere was being bought off. Sam hoped it wasn’t in the police department. His brother Mike was a SWAT officer with the San Diego PD and incredibly proud of it.

Someone had definitely dropped the ball, though. So the ship owner had decided to go private.

For a hell of a lot of money, Sam had gone undercover, working the night shift as a stevedore, spreading word around that he wasn’t averse to some under the table money. He’d been contacted, quickly made his way up the hierarchy of the Bucinski gang and had finally risen to the point where they included him on two major hauls. He’d been wired to the teeth and had about a hundred photographs nailing gang members, their scumbag boss, and three corrupt Port Authority employees.

The fuckheads had not just been stealing cargo, they were involved in sex trafficking, too, bringing in kidnapped young girls hidden in the holds of legitimate ships, the owners of the ships entirely unaware of their human cargo.

The whole gang was going down. The shitheads deserved the needle but wouldn’t get it. They would, however, spend the next twenty to thirty being some gangbanger’s newest girlfriend, which might even be better.

So Sam had looked like a scumbag the day he first saw her. Being a scumbag had been his job for the previous two weeks.

When San Reston did something, he did it well.

Going undercover wasn’t like in the movies. You ate, dressed, acted and even smelled the part. While undercover, he rarely washed or shaved and wore the same clothes for days at a time. He knew he smelled ripe and looked dangerous. Well, hell. He was dangerous-he was murderous with rage at the thought of fuckheads willing to rape little girls spending even one day out of jail.

He’d been up 36 hours straight and was just coming into the office after another all-nighter to shower, change and grab a few zzzs on his very comfortable office couch when he’d seen her.

Actually, he smelled her before he saw her. The elevator pinged, the doors opened and some floral…thing that travelled into men’s heads through the nasal passageways and fucked with their brains reached out and walloped him.

He saw her a second later and froze. Simply froze. Later, when he’d untangled his head from his ass, he’d been amazed. He’d been a SEAL until his eardrum blew, and he’d been a damned good one.

SEAL training beats surprise right out of a man. You have to have good, solid nerves just to think of trying out for BUD/S. If you were the easily surprised type, you were weeded out fast. Then they took that temperament and forged it into steel.

Nothing took him by surprise, ever.

Except one Nicole Pearce.

« Return to Into The Crossfire